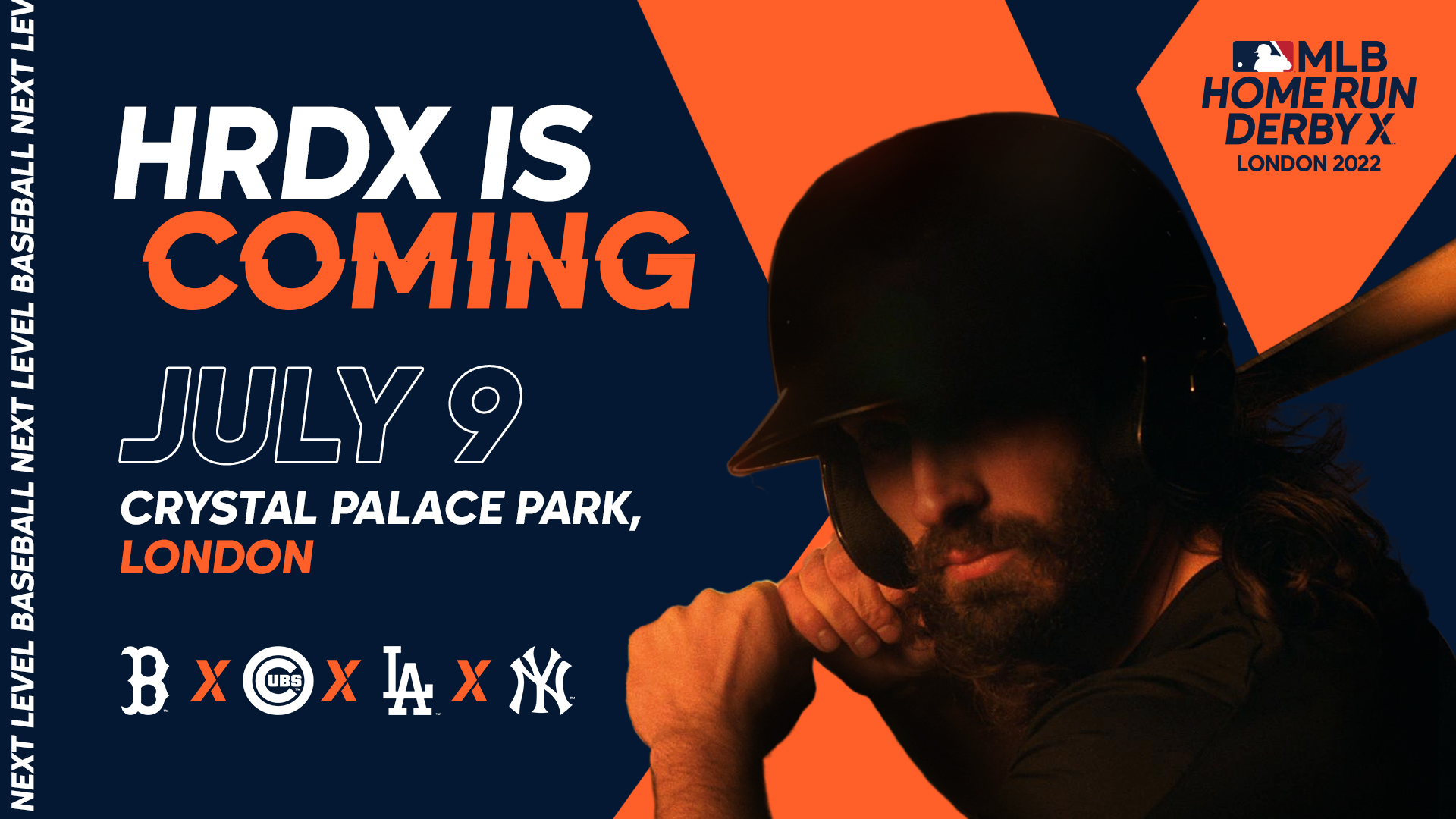 Last week saw Major League Baseball (MLB) launch Home Run Derby X across the globe, an evolution of the classic Home Run Derby format. Celebrating culture and sport, and highlighting MLB’s innovation within baseball, the Home Run Derby X will bring the thrill and power of the HR Derby in an engaging and novel format to London in the first of three global series events in 2022.

Set to launch at London’s Crystal Palace Park on 9th July, Home Run Derby X will then move onto Seoul and Mexico City in September and October respectively.

Inspired by the success of MLB's Home Run Derby, four teams - the Red Sox, Yankees, Dodgers and Cubs - will compete in this tour throughout the year, with a modified field featuring a raised home plate, rules similar to popular MVP Baseball 2005 mini games, and players, celebrities, and special guests at each stop. Each team will be represented by four individuals – an MLB Legend, a Superstar, a content-creator Wild Card and a Rookie. Home Run Derby X will be a global baseball experience like nothing ever seen before!

Now that MLB has gone public with the announcement, it’s time to let you in on a little secret: some of the British baseball and softball community helped bring the event to life at a test event held at BaseballSoftballUK’s (BSUK) Farnham Park National Baseball & Softball Complex!

So, how did this come about?

The baseball and softball community was tasked with finding the very best available batters and pitchers from within the community – those who could consistently hit dingers and pitch the ball in the right spot for batters every time. Over the course of a week in October, two dozen talented baseball and softball players, both male and female, came together to test potential formats and rules for inclusion in Home Run Derby X.

A strict media embargo meant no phones or selfies, one of the biggest challenges for the keen group – but everyone who participated will long remember their involvement in the test; in particular London Legends player Alex Deacon, who won the equivalent of ‘Silver Slugger’ for his consistent HR hitting over the three days.

Commenting on their experiences:

Joe O’Connell, representing the London Mets said, "Last year, I was one of several baseball players given the opportunity to test out the new Home Run Derby X format. It was a fantastic experience to be a part of both as a participant and spectator. Taking the most exciting aspects of the game and condensing it will undoubtedly provide plenty of highlight reel-worthy footage to promote the sport."

Amie Hutchison, representing the GB Women’s Fastpitch National Team, added, “The trial was very well run, very different to a ‘traditional’ Home Run Derby with more variety such as hitting line drives, and also, importantly, having both women and men participating together. I’m delighted to have had the opportunity to take part.”

Home Run Derby X is an evolution of MLB Battlegrounds set in Hyde Park in 2017, when the British baseball and softball community came together once more to demonstrate the appeal of our sports for 20,000 members of public (rising to a stunning 1m online).

Full details of the MLB’s HRDX can be found here and look out for further opportunities to get involved on our social channels.

About BaseballSoftballUK
BaseballSoftballUK (BSUK) is the national development agency for baseball and softball in the United Kingdom. BSUK has provided services to the British Softball Federation (BSF) and the baseball community for more than 20 years, with the ambition of developing and increasing the levels of participation, skill and achievement of baseball and softball across the United Kingdom. Formed in 2000, BSUK employs 12 full-time staff, working towards the goal of making the sports stronger, safer, and more sustainable for future generations.
www.BaseballSoftballUK.com

About British Softball Federation (BSF)
The British Softball Federation (BSF) is the national governing body for softball in the United Kingdom. The BSF organises and promotes the sport of softball, including both fastpitch and slowpitch, in the UK. The BSF is also responsible for the administration of the GB Softball National Teams programme, currently ranked 12th in the world by the World Baseball and Softball Confederation. The BSF works closely with BaseballSoftballUK and the British Baseball Federation to help grow and develop the sport in Great Britain.
http://www.britishsoftball.org

About Farnham Park National Baseball & Softball Complex
Farnham Park National Baseball & Softball Complex is the UK’s only purpose-build, multi-field baseball and softball facility. Owned and operated by BaseballSoftballUK, the facility was opened in 2013, and now features two dual-use baseball and softball fields along with three softball/youth baseball diamonds. The on-site Home Plate Bar and Kitchen is the facility’s clubhouse. Farnham Park is also the national training home for the GB Softball programmes.