What is Farnham Park?

Farnham Park National Baseball & Softball Complex is the UK’s only purpose-built, multifield baseball and softball facility. Owned and operated by BaseballSoftballUK, the facility was opened in 2013, and now features two dual-use baseball and softball fields along with three softball/youth baseball diamonds. The on-site Home Plate Bar & Kitchen is the facility’s clubhouse and pub, located by the entrance. Farnham Park is also the national training home for the GB Softball National Team programme.

In 2009, BaseballSoftballUK embarked on a journey of facility improvement for the two sports, guided by its 2010-17 Baseball and Softball Facilities Strategy.

Three years after starting the project, the facility opened as the country's first purpose-built baseball and softball complex at Farnham Park Sports Ground in Buckinghamshire during the first week of June 2013 with school, league and tournament softball play – and to great acclaim. One long-time player said: “The sport has finally grown up!”

The Official Opening for the Farnham Park facilities was held on 20 July 2013, with over 500 people in attendance, a ceremony chaired by sports media personality Colin Murray and baseball, fastpitch softball and slowpitch softball all being played on site. Over the remainder of the 2013 season, the fields were used for National Championship events in both baseball and softball as well as league and tournament play, development sessions and national team training, and it's clear that having dedicated fields has brought about a sea change in players' perceptions of the sports.

The facility has also been built to accommodate extensive use by the local community through a range of local development programmes, as well as by domestic league and tournament competitions – and eventually international events.

In 2017, a second full-sized baseball diamond was added and a clubhouse opened, the main feature of which is Home Plate Bar and Kitchen, providing a dedicated place for players and spectators to eat, drink, relax and socialise at baseball and softball events.

In 2022, a third full-sized softball diamond, a newly resurfaced infield on Softball Field 2, and other improvements across the site are planned - stay tuned for the latest information and updates!

Looking for food and refreshment at Farnham Park? Then reaching Home Plate Bar and Kitchen should be your aim!

Home Plate provides a dedicated place for players and spectators at Farnham Park to eat, drink, relax and socialise. 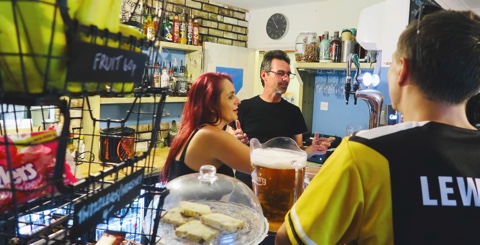