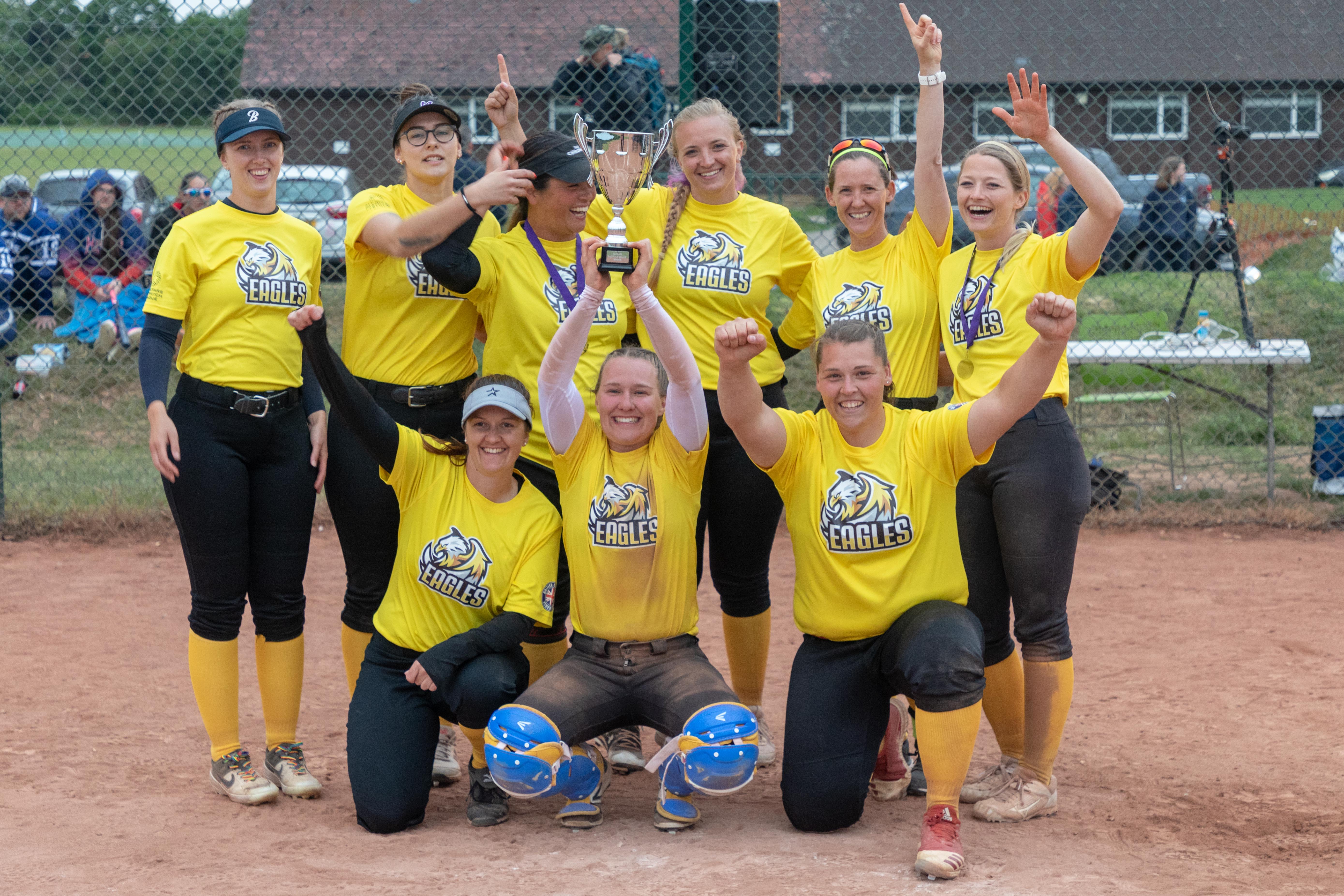 The 2022 All Stars Fastpitch League Series came to a successful conclusion on Saturday evening 4 June at Farnham Park National Baseball and Softball Complex as the Eagles posted a 6-1 win over the Ravens, backing up their 8-4 victory in the first fixture in May, and took the Series trophy.

In unpredictable weather where rain and storms threatened to hamper proceedings, the game was happily played out to a full seven innings.

Prior to the game, spectators were treated to British Softball Federation (BSF) award ceremonies honouring Annual Award winners and Hall of Fame inductees.  Then Ravens and Eagles players were individually announced and cheered onto the field, the national anthem was played – apt on the Queen’s Jubilee Weekend – and former BSF President and Hall of Famer Jenny Fromer threw out the ceremonial first pitch. 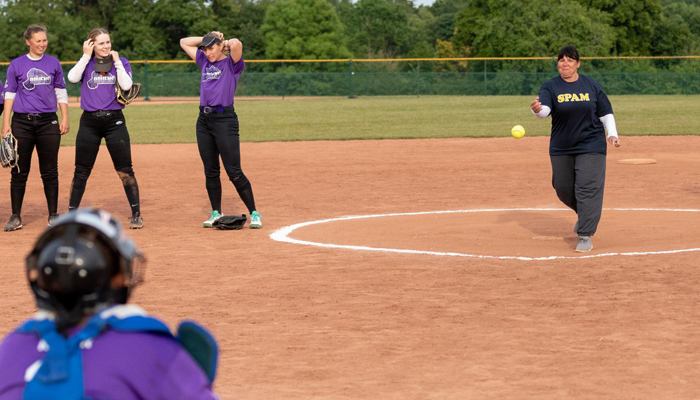 Officiating the game fell to leading fastpitch umpires Bridget Cameron at the plate and Jana McCaskill in the field. 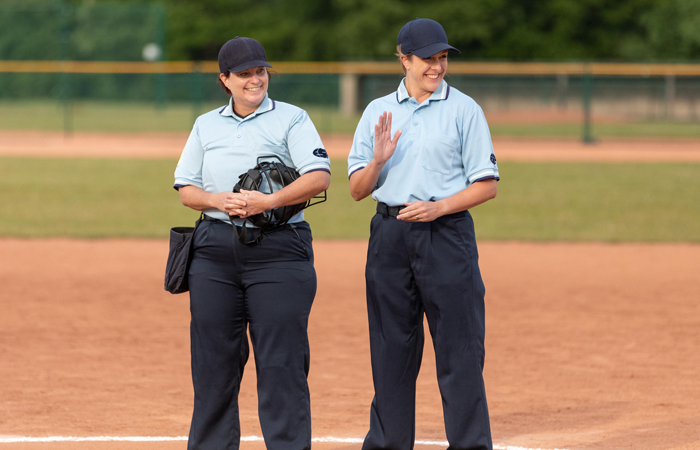 The two teams that made up the inaugural All Stars Fastpitch League brought high-quality women’s fastpitch softball to Farnham Park and both games were played in front of a substantial number of spectators at the end of a day of National Softball League slowpitch play. 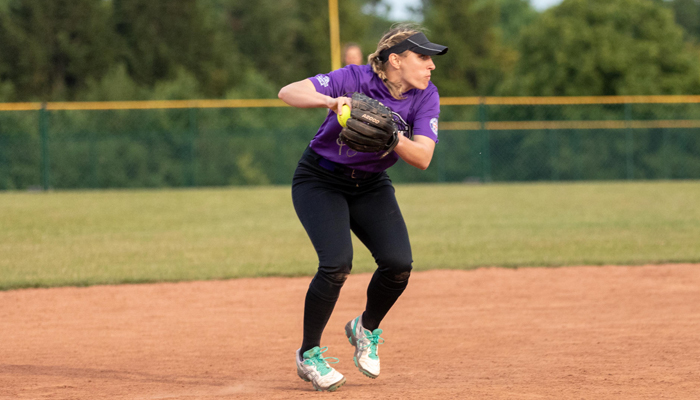 BaseballSoftballUK Head of Fundraising & Partnerships Joëlle Watkins, who was the lead organiser for the event, said “We were brave enough to try something bold and new to draw attention to fastpitch and help boost its growth.  I’m thrilled with the launch and am particularly grateful for all those involved for getting behind the concept so enthusiastically, especially the players, captains, coaches, officials, and the BSF.  We always planned for the league to grow and will seek feedback from all concerned as to how best to achieve this next season and beyond.”

This second game of the series featured the same pitching match-up as the first, with GB Women’s Team player Amie Hutchison pitching for the Eagles and BSUK Fastpitch Development Manager Alyson Spinas-Valainis, who also pitches for Dutch champions Olympia Haarlem, throwing for the Ravens. 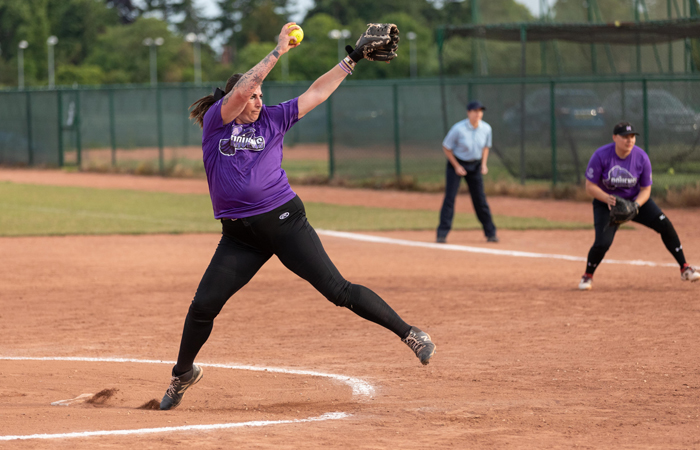 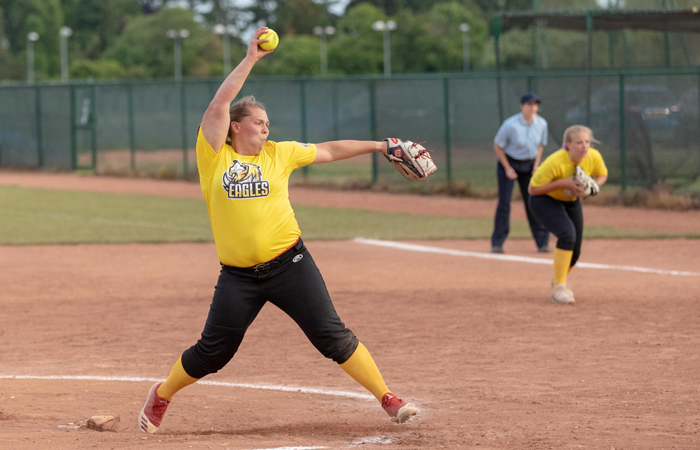 The game was scoreless for the first two innings, but it was the Ravens who struck first, taking a 1-0 lead in the bottom of the third inning.

A lead-off single to left field by Cheyenne Vogel was followed by a sacrifice bunt from Michelle Shaw to advance Cheyenne to second.  A groundout by former Czech National Team star Michaela Sulcova moved Cheyenne to third and she scored on a single up the middle by shortstop Alyssa Johnson. 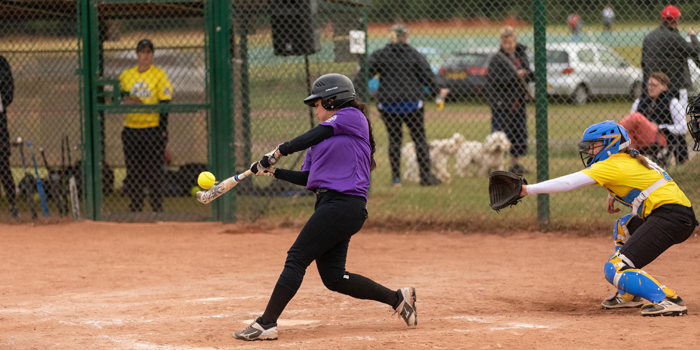 But, as it turned out, that was the only run the Ravens were able to score in the game. 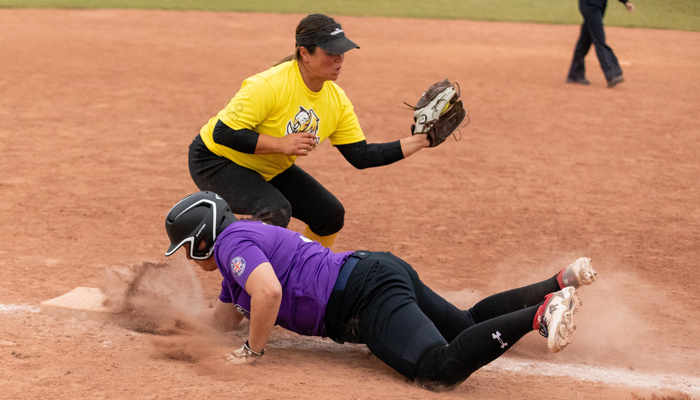 Alyson Spinas-Valainis throws harder than Amie Hutchison and recorded nine strikeouts over the course of the game to Amie’s four.  But Alyson also gave up nine hits, whereas the Ravens only managed four hits against Amie, who induced 13 infield ground balls or pop-ups over the course of the game, didn’t walk a batter, and set the Ravens down in order in four of the seven innings. 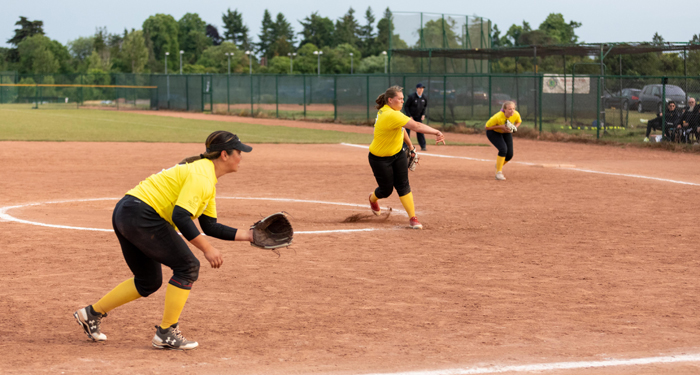 The Eagles had mounted their first threat in the top of the second inning when Amie Hutchison and Chiya Louie led off with singles.  But Alyson struck out Kat Golik and Kim Hannessen, and Emma Agostini grounded out to Cheyenne Vogel at first.

In the top of the fourth inning, however, the Eagles took the lead with a pair of runs.  Chiya Louie stroked a one-out single to left field, moved to second on a sacrifice bunt by Kat Golik and scored on a single to right field by Kim Hannessen.  Kim then moved up to second on a passed ball and scored on Emma Agostini’s single.

A single by Jade Yerex, a double to right field by Amie Hutchison and a single to right by Chiya Louie – her third hit of the game – brought in the two Eagles’ runs in the fifth inning. 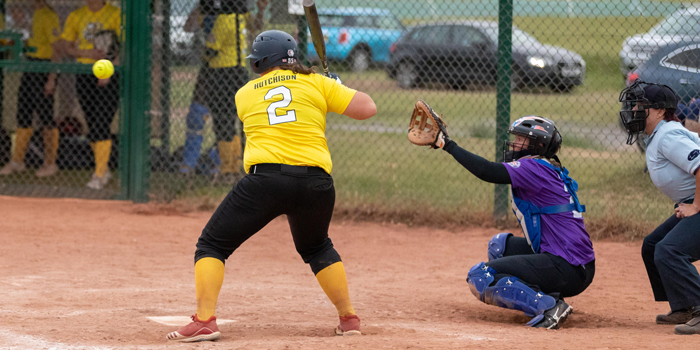 In the sixth inning, a lead-off single by Kim Hannessen, a two-out single by Jade Yerex, an error and a wild pitch accounted for two more and took the score to 6-1, which is where it remained.

Apart from the run they scored in the third inning, the only real threat the Ravens mounted against Amie Hutchison came in the bottom of the fifth inning when Cheyenne Vogel led off with a triple to right field.  But Cheyenne was stranded at third as Amie struck out Michelle Shaw and then got Michaela Sulcova to ground out and Alyssa Johnson to pop out to Emma Agostini at first base.

No runs were added by either team in the seventh inning, but there were two fine defensive plays.  In the top of the inning, Ravens centre fielder Megan Beard made a great catch to take a hit away from Amie Hutchison, and in the bottom of the inning Eagles shortstop Jade Yerex made a great grab of a hard line drive by Jess Page Fenner to end the game and the series.

Awards, comments and thanks

The award for Best Offensive Player went to Chiya Louie for solid and consistent hitting. 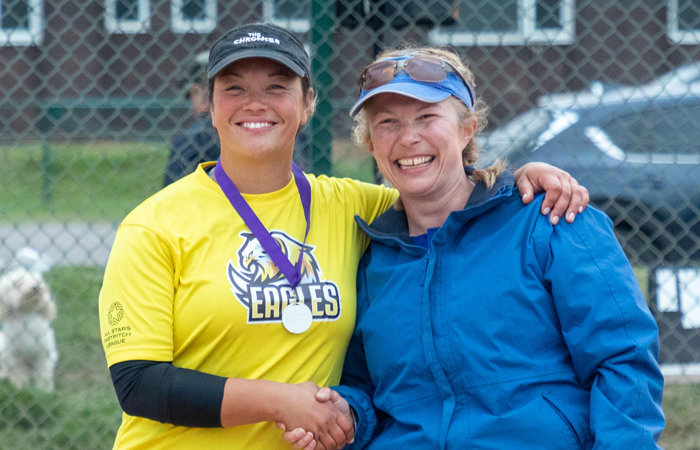 The Best Defensive Player award went to Jade Yerex, both from the Eagles. 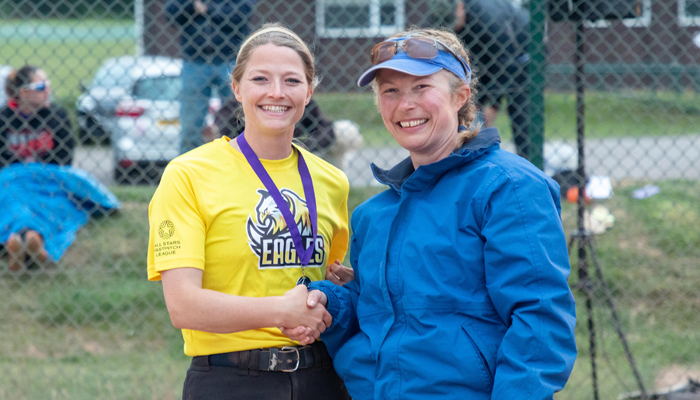 Medals were presented by Julie Spittle, BSF Hall of Famer for services to youth development, who went on to hand the series trophy to Eagles’ captain Kim Hannessen.

After the game, Kim Hannessen said, “It was important to showcase the highest possible level of fastpitch to those unfamiliar with it in the UK and I believe we achieved that with the All Stars games.  As a result, I’d love to see more people enter the Great Britain Fastpitch League and for the league to expand with more competitive teams.  Today, the Eagles put in another great performance on the field and I’m very proud that we took the 2022 Series title.” 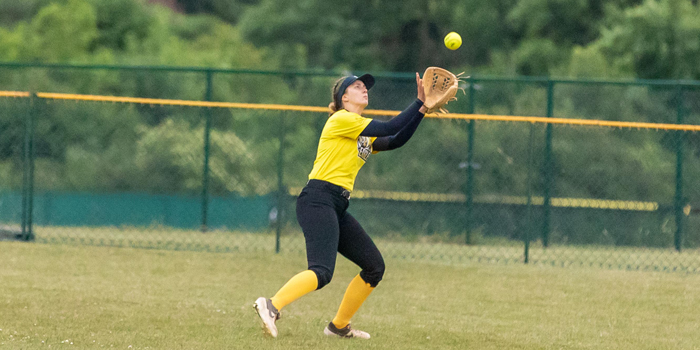 Eagles shortstop Jade Yerex added, “It was great to see women from both the fastpitch and slowpitch communities come together to hopefully inspire and grow the sport in the UK.  It was an amazing experience to play with such talented athletes and I’m honoured to have been selected as an All Star.  As for today’s game, my teammates worked really well together to earn us the win.” 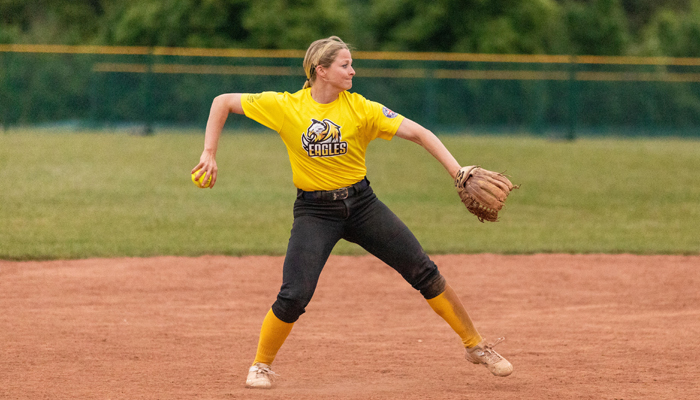 Thanks to the raft of volunteers who all helped on the day including Alan le Marquand, Jenny Fromer and Lorraine Phee, plus all the outfield ‘fence movers’!