The very first game of the BSUK/BSF All Stars Fastpitch League, contested by the Ravens and the Eagles, got off to an auspicious start in fine spring weather at Farnham Park National Baseball & Softball Complex on Saturday 21 May.

The teams were composed of specially-selected women players from across British fastpitch and slowpitch softball, including GB National Team players and players from the Great Britain Fastpitch League. 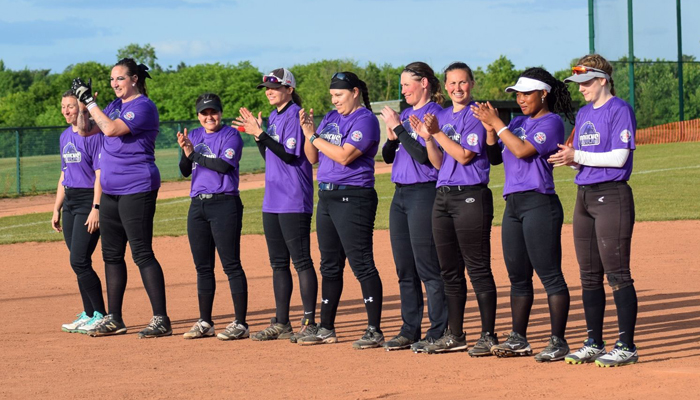 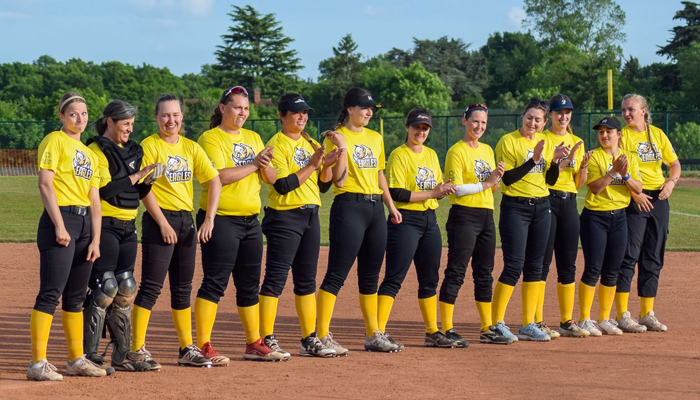 The game was presented as a showpiece event after National Softball League play concluded for the day and had a sizeable crowd watching the action. 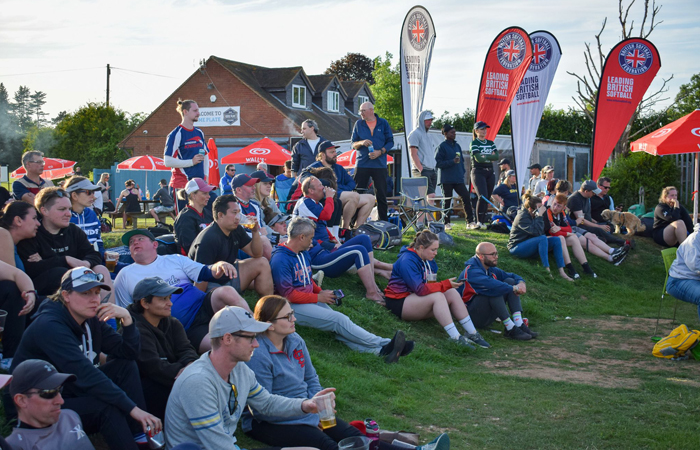 The Ravens and Eagles slugged it out over five innings in a close game, which ultimately saw the Eagles take the win by 8-4.

In a move intended to significantly raise the profile of the Olympic format of women’s fastpitch softball, players received a nominal financial contribution to play for the first time in the UK, part of plans to grow the league and put on more showpiece games in years to come.

To kick off proceedings in style, players were introduced individually on the field, followed by the national anthem and a ceremonial first pitch thrown by Softball Europe Hall of Fame inductee Steph Jardine, caught by Eagles’ Bat Kid Henry Kittinger. 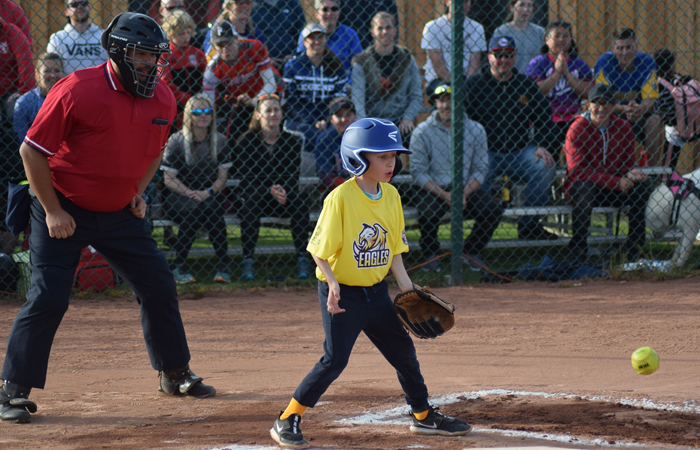 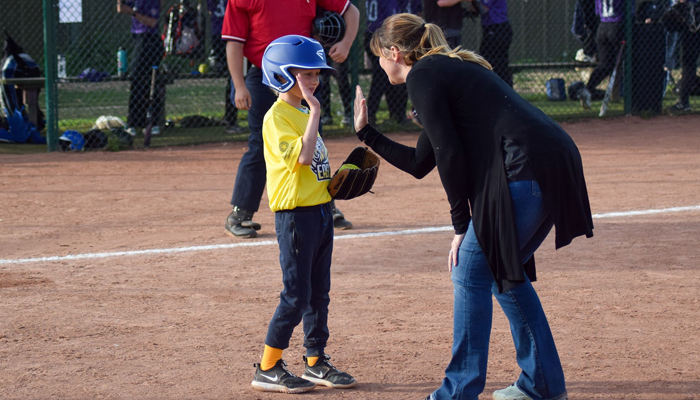 Match officials David Hurley behind the plate and Darrell Pittman in the field, both Softball Europe-qualified umpires, were kitted out in bright red. 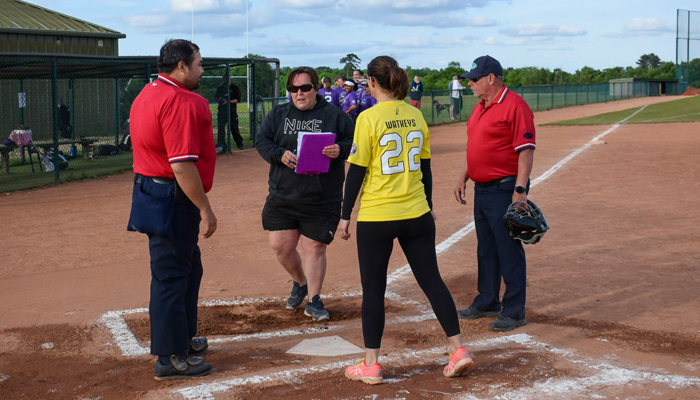 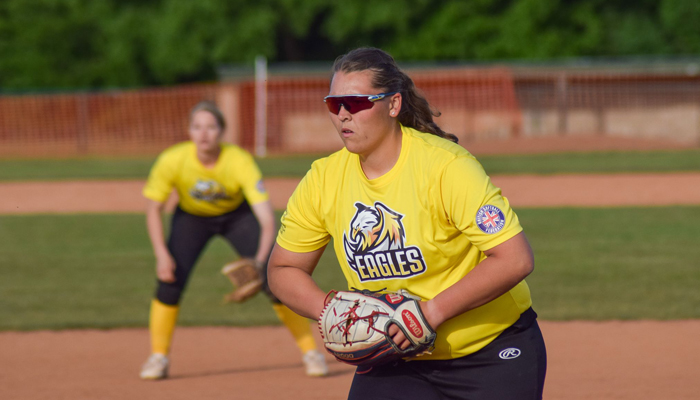 The Ravens failed to score in the top of the first inning against Eagles’ pitcher Amie Hutchison from the GB Women’s Team, who induced infield groundouts from Crista Reed-Thomas, Kexin Wang and Megan Beard.

But the Eagles also struggled in the bottom of the inning against Ravens pitcher Alyson Spinas-Valainis, currently pitching for the top Dutch team Olympia Haarlem, who set down Jade Yerex and Chelsie Robison on infield grounders, sandwiched around a strikeout of Dani Briggs. 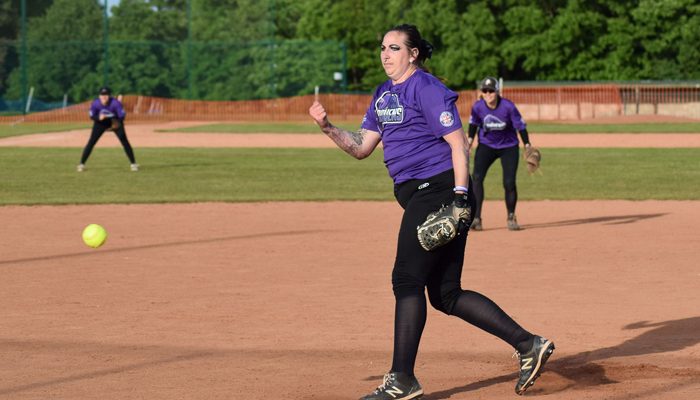 It was a different story for the Ravens, however, in the top of the second inning.  A leadoff single by Barbara Killer, a sacrifice bunt by Cheyenne Vogel, another single by Jenny Ball and then a two-run triple to deep centre field by Alyson Spinas-Valainis and an inside-the-park home run from Alyssa Johnson propelled the Ravens into a 4-0 lead.

Alyson Spinas-Valainis then produced a shutdown inning in the bottom of the second, striking out Amie Hutchison, Kim Hannessen and Kat Golik.

Amie Hutchison regained her pitching form in the top of the third inning, setting down the Ravens on three infield groundouts.  And then the Eagles’ offense got into gear with two runs in the bottom of the frame, with the key hit a triple by Dani Briggs.

In the bottom of the fourth inning, the Eagles closed to just one run behind, at 4-3, on an inside-the-park home run by Sian Wigington.

The game was decided in the fifth inning – which turned out to be the last inning due to light.  It’s not that the light was bad, but rather that the setting sun behind the backstop on Pitch 1 was shining right into fielders’ eyes, making further play difficult.

The Ravens went down tamely on three groundouts in the top of the fifth, but the Eagles made the most of their last at-bat. 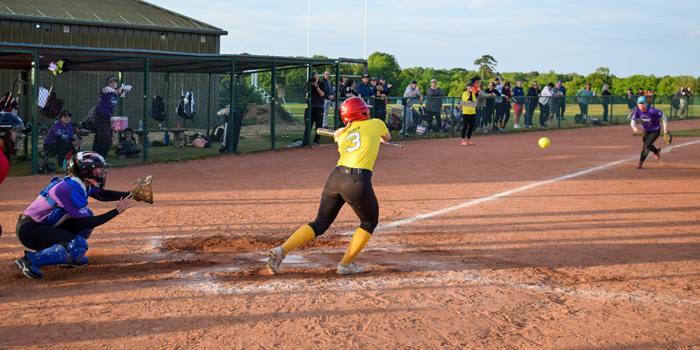 A single by Kristen Kittinger to left field, a bunt base hit by Jade Yerex, a triple by Chelsie Robison and a double to centre field by Amie Hutchison took the Eagles into the lead, and Chiya Louie sealed the game in style with a two-run inside-the-park home run, ending with a slide into home that made the final score Eagles 8, Ravens 4. 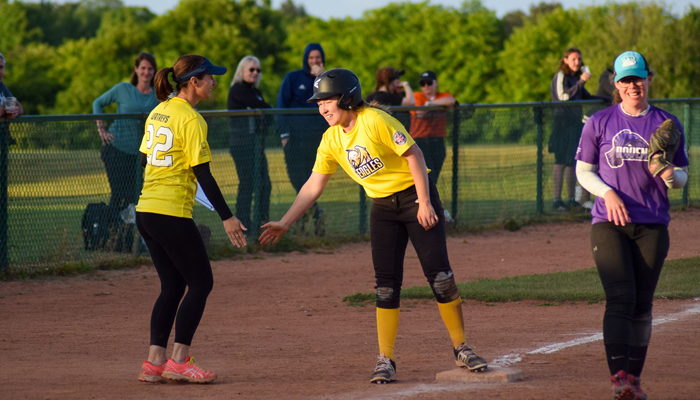 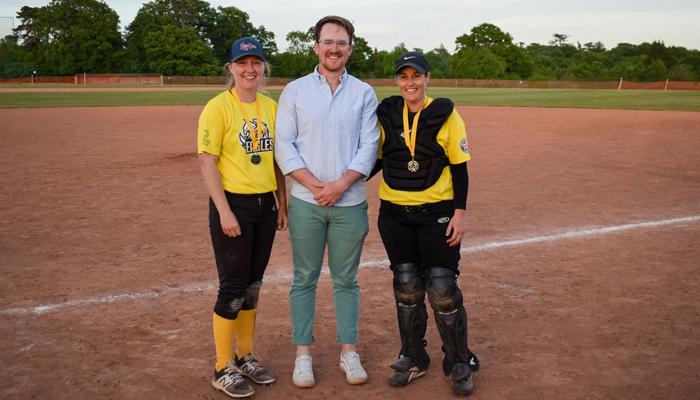 Liz Knight said, “The players had the right mindset going into the game, knowing they wanted to play to win but also wanting to show off the thrills of fastpitch to the spectators, many of whom were unfamiliar with the game.  Going into the decisive second game, we’ll make sure the Eagles don’t fly away with the trophy!”

Amie Hutchison added, “This was the highest level of women’s fastpitch I’ve seen played in the UK in a long time.  The game itself was closer than the final score suggests and sets up well the return game on 4 June.  Like my teammates, I was thrilled at the opportunity to join the League as an inaugural player.”

An army of volunteers were involved in supporting the event, with special thanks going to Jenny Fromer for scoring, Lorrain Phee on the PA, photographers Simon Mortimer and Alan le Marquand, and general help from Josh and Mikey Barrett.

The next game in the All Stars Fastpitch League will be played on Saturday 4 June at Farnham Park, starting at 6.45 pm following National Softball League play.

If it’s anywhere near as good as the first game, it will be well worth seeing! 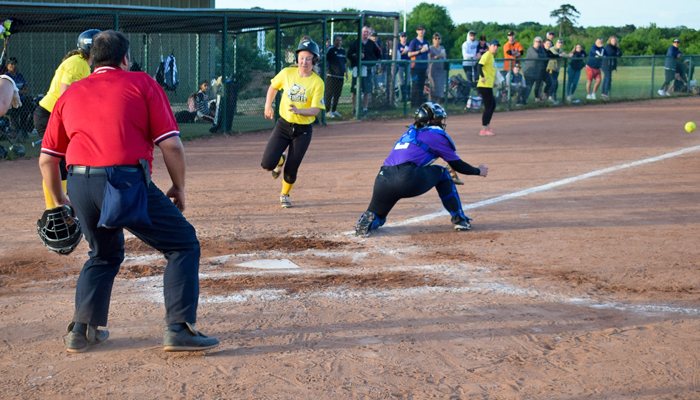