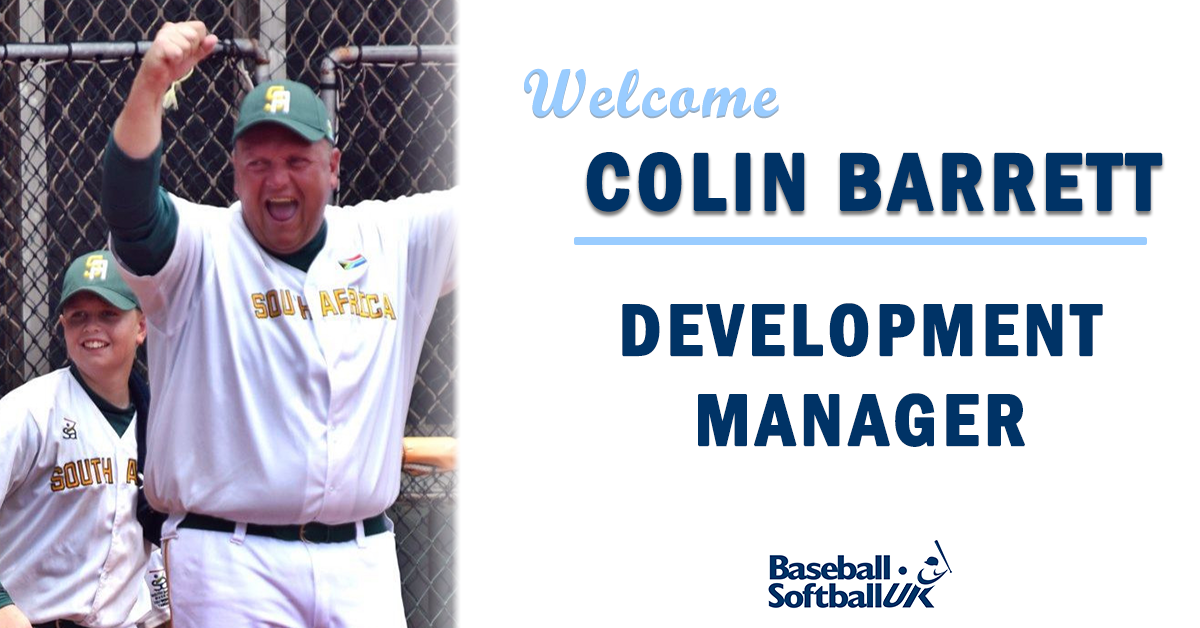 BaseballSoftballUK (BSUK) is delighted to appoint Colin Barrett to the role of Development Manager.

Colin joined BSUK in 2021 on a fixed-term contract, and was responsible for the well-received virtual Coach Summit 2022, as well as a fixture at Academy sessions. Following this period, Colin was elevated to a full-time role with BSUK on 1 April 2022.

Colin’s work includes leading on Coach Education, developing relationships as a relationship manager for Chartered clubs in the South East, increasing community engagement at and around Farnham Park National Baseball & Softball Complex, developing and leading on blind baseball, as well as club development. He will also help lead the Academy Baseball programme and will work closely with BSUK’s new Talent department.

Colin started playing baseball at the age of five for the Imps Baseball Club and played his youth baseball for Imps until the age of 16. He also started playing softball at the age of 7 at school, and was selected as a pitcher for the Eastern Transvaal U13 Provincial Team. Colin represented both his province and South Africa all junior age groups. Following his junior career, Colin played senior men’s baseball and softball at the provincial level and represented the South African Softball Team on-field from 1997 until 2003.

In 2004, Colin became the coach of the South African Softball squad that participated at the World Softball Championships. He also coached the South African U12 Baseball Team in 2017 and 2019 at the WBSC U12 Baseball Championships. His love of coaching led him to become the Deputy Director of Sport at King Edward VII Preparatory School in South Africa from 2018 to 2019, where he coached or assisted in 7 different sports – not counting baseball or softball.

Colin is currently the GB Men’s Fastpitch Softball Head Coach and is creating a “Softball Family” where he is working to upskill and grow a programme for homegrown talent.

His wife Erica is BSUK’s Head of Operations, and four sons are all involved in the UK baseball and softball community, with son Josh winning BSUK Player of the Week honours for Milton Keynes baseball last year.

Speaking about his appointment, Colin said,” I am excited to be able to do what I love. Baseball and softball are my passions and I enjoy being able to give back to both sports what I have learnt through my playing and coaching careers. I just want to take this opportunity to thank BSUK for giving me an opportunity to help develop the games we love.”

Head of Development, Chris Rawlings, remarked, “Colin will be a great addition to our Development Team. He brings a wealth of real-world experience in our sports along with with a strong skill set. His work will centre on leading BSUK’s Coach Education, as well as providing support to the Chartered clubs and leagues in the South East. He will also be engaging the community around Farnham Park, and leading on Blind Baseball, as well as focusing on relationships with individual clubs. I am excited to have Colin on-board full time and look forward to working with him in the coming months.”