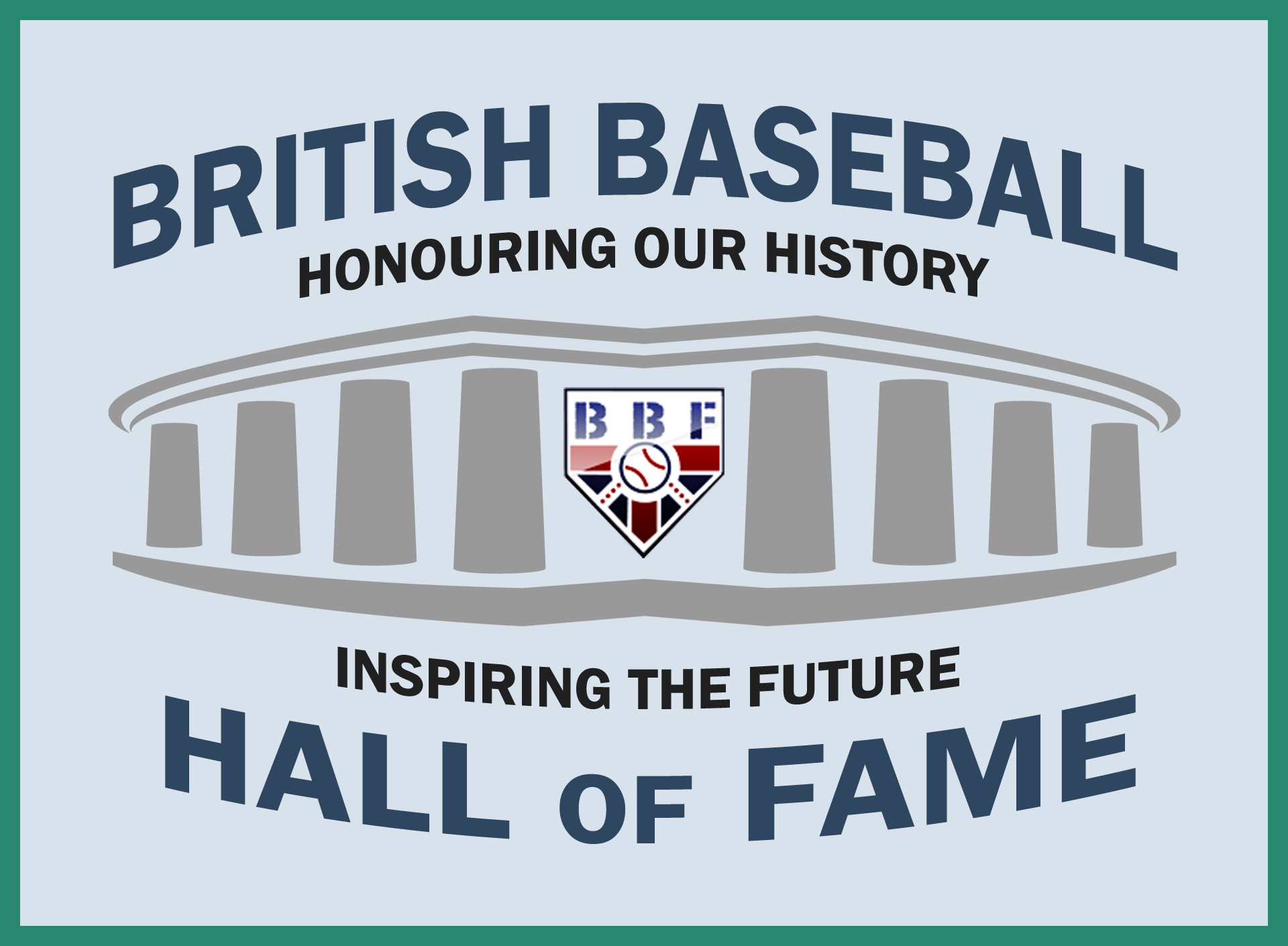 The British Baseball Hall of Fame is pleased to announce the Class of 2022, including a trailblazer for women in baseball in Britain, the first scorekeeper ever elected, and four Great Britain national team members. Brian Holland, Richard Klijn, Frank Parker Jr., Stephan Rapaglia, and Ryan Trask were elected by the Modern Committee, with all but Rapaglia honoured in their first year on the ballot. Meanwhile, the Historic Committee selected another rookie candidate, Doreen Megson, a pioneer for women in baseball in the U.K. Exactly fifty men and women are now enshrined in the BBHOF for their superlative contributions to British baseball.

If the word ‘scorebook’ was synonymous with only one person in British baseball history, it would be Brian Holland. A chance turn of the radio dial as a young man turned into a lifelong obsession that brought him—scorebook in hand—to cities across England and Scotland and the best seat in the house for almost every important baseball game between the mid-1960s and 2007. Holland was the official scorekeeper for the first official game for Great Britain and for every CEB  event hosted in the U.K., with his ever-present scorebooks opened at venues like Old Trafford, Stamford Bridge, Selhurst Park, and The Oval. Few can claim to have even been present at as many British national championships as Holland—at least fourteen in total—let alone filling a crucial role in an official capacity.

Richard Klijn retired in 2020 after a storied and decorated career. At the international level, Klijn played in eight major competitions for Great Britain, including a World Cup, five European Championships, and two World Baseball Classic Qualifiers. Upon retirement, he ranked as GB’s second most-capped player and was sixth on the career hit list (32). Klijn also holds the record for most hits in a single tournament (12) by a British-born player, compiled at the 2016 European Championship. At the club level, he played 12 seasons in Germany’s Bundesliga 1, winning five national championships, each a record for British-born players.

The middle link in three generations of talented GB Baseball players, Frank Parker, Jr. was one of the top hitters of the 1980s and 90s. Best known as one Great Britain’s top sluggers and son of Hall-of-Famer Frank Sr., Frank Jr. picked up where his father left off, playing in six European Championships and nine other events over a storied 18-year international career, retiring with his name littered across GB’s team record book. When hanging up his spikes, no GB player had driven home as many of his teammates as Parker (19 RBI) and he was second in home runs (3) and slugging percentage (.545), third in career hits (23), and No. 5 in batting average (.348, 50 at-bats minimum). All of those figures are still in the top five. Domestically, Parker earned two all-star nods and delivered key hits in the national playoffs and cup.

In a sport where men tend to dominate, Doreen Megson was not only a trailblazer for women in British baseball, but played a pivotal role in Hull’s emergence as the hub of baseball activity in the U.K. after World War II. In early 1953—still only in her twenties, and with four Hull Ladies’ League titles under her belt—she became the first known woman in England to pass an umpire’s exam. Megson was only just getting started, however, as she became a nationally renowned technical administrator and organised England’s first official CEB1 event. By her retirement in the mid-90s, she had been part of the Technical Commission at two European Championships and the 1976 National Championship (possibly others), served as secretary for the busy Humberside League for many years, organised countless youth programmes, and even played in what is likely the first-ever international softball game in Britain.

Stephan Rapaglia served as the Great Britain National Team’s head coach for seven years, beginning in 2004, and led the squad to one of its greatest performances in European Baseball history—a silver medal at the 2007 Euros in Spain. It was only the second time Great Britain had won a medal in European Championships, and no other squad since has equalled the feat. Rapaglia skippered GB in three European Championships and the 2009 World Cup. Notably, he was able to recruit a number of high-profile players to the GB squad, including Mike Nickeas and Brant Ust, the most prominent newcomers ever to feature on the British national team.

Ryan Trask found his way to Bracknell after moving to the UK from South Africa in 1999 and made his senior baseball debut one year later at only 14 years old. His contributions to Bracknell as a young player were significant and he was an invaluable member of the Blazers’ 2009 National Championship squad. Trask was also a regular for Great Britain, suiting up in a dozen events between 2002–13. In domestic competition, he ranks in the top eight in six career statistical categories and holds two single-game records. The catcher-outfielder offered a particularly rare blend of power and speed, retiring with the fifth-most stolen bases (106) and home runs (28) all-time. Only one other national leaguer, Hall-of-Famer Alan Bloomfield, retired with more than 100 swipes and five homers.

Details of the 2022 British Baseball Hall of Fame induction festivities, if possible, will be released at a later date, in accordance with government guidelines for public health. Biographies, statistical highlights, and photos of the previous 12 classes of inductees can be found at bbhof.org.uk.

Official Comments on the Announcement

‘This year’s British Baseball Hall of Fame inductees showcase the rich history, diverse nature, and quality of baseball in Britain. The election of multiple members of the national team of Great Britain, with careers spanning four decades, reveals the growth of the G.B. programme as it prepares for its first-ever appearance in the highest level of the World Baseball Classic. Just as importantly, the Class of 2022 also honours the first female umpire in British history and its most prolific scorekeeper. These six inductees—who discovered the sport through a local girls’ club, radio broadcasts of games, watching a father contest his Hall-of-Fame career, and the practice of a familiar activity after emigrating to the U.K.—also underscore two of baseball’s best attributes—anyone can play, and all are welcome.’

‘I am particularly pleased with the selection of Doreen Megson for British baseball’s greatest honour. Megson was truly a pioneer, both for women’s baseball as an important part of the bat-and-ball landscape, but even more so for her rugged determination to earn certification as an umpire in her early 20s—despite being told she could not officiate any games. Megson is a role model for all girls and women in as sport, making significant contributions to league and youth programmes in the tough environment of post-WWII Hull and later at the national level as an adroit scorekeeper and technical official.’

‘One of the most overlooked—yet crucial—roles in the highly technical sport of baseball is that of scorekeeper. Despite every game featuring a scorer, until now, no statistician had been honoured with induction into the British Baseball Hall of Fame. Brian Holland quite deservedly becomes the first scorekeeper enshrined, entering the Hall at the same time as Doreen Megson, herself a nationally renowned technical official.’

‘Since last year, ongoing research into the almost 300-year history of baseball in the U.K. has revealed inspiring stories, new champions, and details of many other intriguing people and teams. All of this important work is accomplished by volunteers, and further enhances the already rich archive of material at Project COBB, which shines an important light on British culture in the last 150 years. I look forward this year to hearing these stories told and honouring local trailblazers and heroes from the grassroots level to international sporting stars.’

Details of Note by Inductee

About the British Baseball Hall of Fame (BBHOF)

In 2019, only a few weeks after the historic London Series, the sport celebrated the 270th Anniversary of the first recorded baseball game in history, which took place on 12 Sep. 1749 in Walton-on-Thames. The rich history of the sport since then—including a total of 93 known national champions between 1890 and 2022—led to the formation of the BBHOF by Project COBB founder Joe Gray, for the purpose of ‘honouring our history, inspiring the future’. Its Board of Electors includes 13 members, all distinguished members of the British baseball community. Nominees may be proposed by members of the public, while electors and a panel of Regional Experts also recommend, research, and compose biographies of potential inductees. The Hall is endorsed by the national governing body of the sport, the British Baseball Federation.

Project COBB is the archive for baseball in the UK, including the official archival resource for Great Britain Baseball national teams. Those interested in the broader history of baseball in Britain—including a list of all known national champions between 1890-2020, a wide variety of historical documents, statistics, published research, and much more—should visit www.projectcobb.org.uk. If you have any records, statistics, clippings, programmes, or other items of interest not already featured in the archive that you are willing to scan, loan, or donate, you are encouraged to write to info@projectcobb.org.uk.